Nafplio is easily one of the prettiest towns in Greece and arguably one of the prettier ones in Europe! Nafplio can be found in Eastern Peloponnese and is located about 2 hours from Athens by car. It’s great for a day trip from Athens or even a weekend trip if you’ve got more time. There’s plenty of things to do in Nafplio but even if you’re headed there just to hang out on the beach you will not be disappointed!

The town has a ton of different influences owing to the fact that they were occupied by Frankish, Turkish and Venetian forces. When Greece won their independence during the Greek Revolution in 1822, Nafplio actually became the capital of Greece! The town gets it’s name from its settler who was the son of the god Poseidon which makes sense given the close proximity to the water.

Grab some dessert at the port

All along the port there are a number of restaurants with patios that provide you fantastic views of the water and the sunset if you want it! Ask to be seated on the patio and for a dessert menu and you won’t regret it. We spent a solid hour enjoying our ice cream and just relaxing on the cushioned seats on the patio. We opted to grab dessert as a mid-day break because a lot of the patios will have some fans going which along with the ice cream will definitely help cool you down!

Check out the street art where you can find it

While the town is very clean people have still found ways to express themselves. They’re easy to miss if you’re not paying attention to them so make sure to look at the little electric boxes that you typically see everywhere on streets. Some of the art is quite beautiful!

Located 857 steps above the town, you’ll find Palamidi Fortress. It is often said that there are 999 steps but according to the official Nafplio website it is “only 857” steps. The fortress was built between 1711 and 1714 by the Venetians and was used as a prison for over 100 years from 1840 onward. The stairs were built in conjunction with the fort becoming a prison. Because of the high position it’s a great place to take in some aerial views of Nafplio!

There is an admission fee of 8 euros and it’s open daily between 8 am and 3:30 pm but it’s highly recommend that you check the opening hours on the sign at the bottom of the stairs to make sure! While we didn’t get the opportunity to explore the fortress it does look like a great way to spend some of your time in Nafplio especially if you’re up for the walk up and it’s a great place to take in some important history.

The Nafplio National Gallery hosts a collection of art dedicated to the struggles of the Greeks against the Turks in particular and they also have some temporary exhibitions which will vary depending on when you’re visiting. If you’re interested in the gallery head over to their official site for hours etc.

Hang out at the Squares

It seems to be a common thing across Europe for towns to have main squares for people to gather in. Nafplio is obviously no exception and has 4 major squares worth checking out during your strolls. Three Admiral’s Square is named so for the three admirals that fought for Greece during the Battle of Navarino in 1827. It’s got lots of beautiful architecture around it and it’s in Three Admiral’s Square that you can find Nafplio Town Hall. Syndagma Square has the most historical importance in Nafplio and comprises the center of the city. Many residents gather here for coffee or dinners since the square is lined with restaurants and important buildings. The other squares are Kapodistrias Square and Philellinon Square.

Despite being a smaller town, Nafplio has a number of museums you can check out during your visit.

One of these museums is the Komboloi Museum which is a museum of “worry beads” (rosaries). It’s pretty easy to miss the museum since it’s located in a privately-owned two-story building at 25, Staikopoulou Street but it’s worth a visit since rosaries are one of the things that Nafplio is actually known for! The museum is on the second floor and the shop on the first floor. There is a 2 euro entrance fee to the museum. We didn’t get a chance to go because to be honest I had no idea it existed until we left the town! How sad right? Their official website‘s all in Greek but they do have the hours listed on there so check those out before your visit.

Other museums include the Archaeological Museum of Nafplio, the Peloponnesian Folklore Foundation Museum and the Nafplion Museum of War. Given the historical importance of Nafplio it would make sense to dedicate part of your day to exploring its museums.

Grab lunch/dinner at one of the many restaurants

Nafplio has a ton of different restaurants that all looked amazing. We picked one at random and had some of the best Greek food we had on our trip. The restaurants are all up and down the main streets with most of them having plenty of seating right on the street. If you’re visiting on a beautiful day I highly recommend getting a table outside! Great atmosphere and great for people watching!

Check out the old train station at Nafplion Railway Park

Nafplio was one of the first places in Greece to get train service and the station in Nafplio opened in 1886 with service to Athens. The station operated until 1963 when the line was discontinued. While the line was put back into operation in 1993, the station was moved to the port so the old station was left open to the public as a park. There are flower beds, the old trains and a refreshment bar for those who choose to visit! It’s a cool piece of history and you’ll probably come across it while walking across the town. 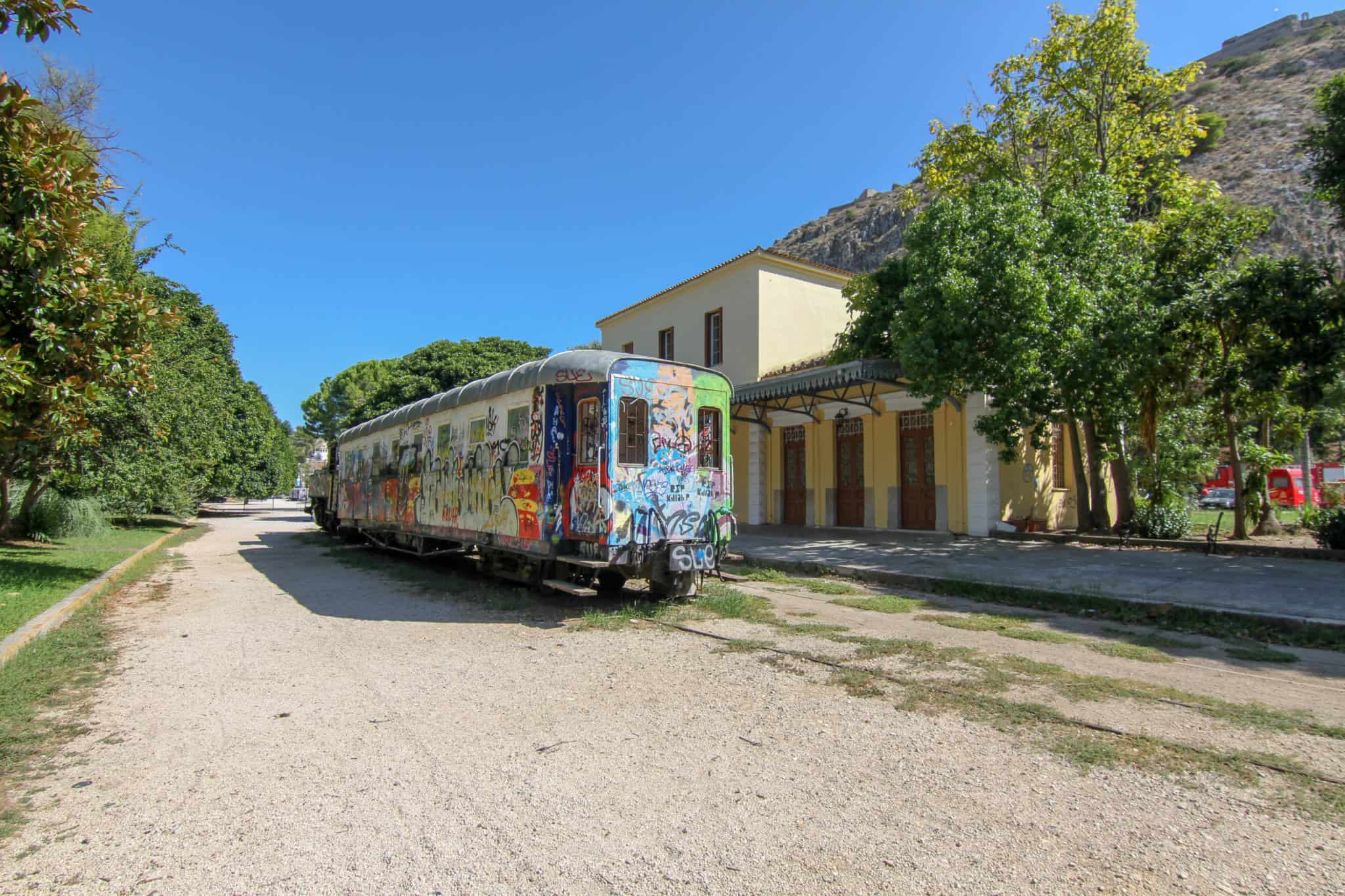 Nafplio has both a hop on hop off bus and fun train that are both designed to take you around the town. The Hop on Hop Off Bus is similar to ones you’ve seen in major capital cities across the world. It costs 8 euros for adults and 5 euros for children and operates in the summer. You can check out more details on their stops and the schedule here. The Fun Train is a train that does a 20 minute tour of Nafplio. Tickets cost 4 euros for adults and 3 euros for children. The train runs all year long but the schedule does vary with the time of the year so I highly recommend checking it out here. 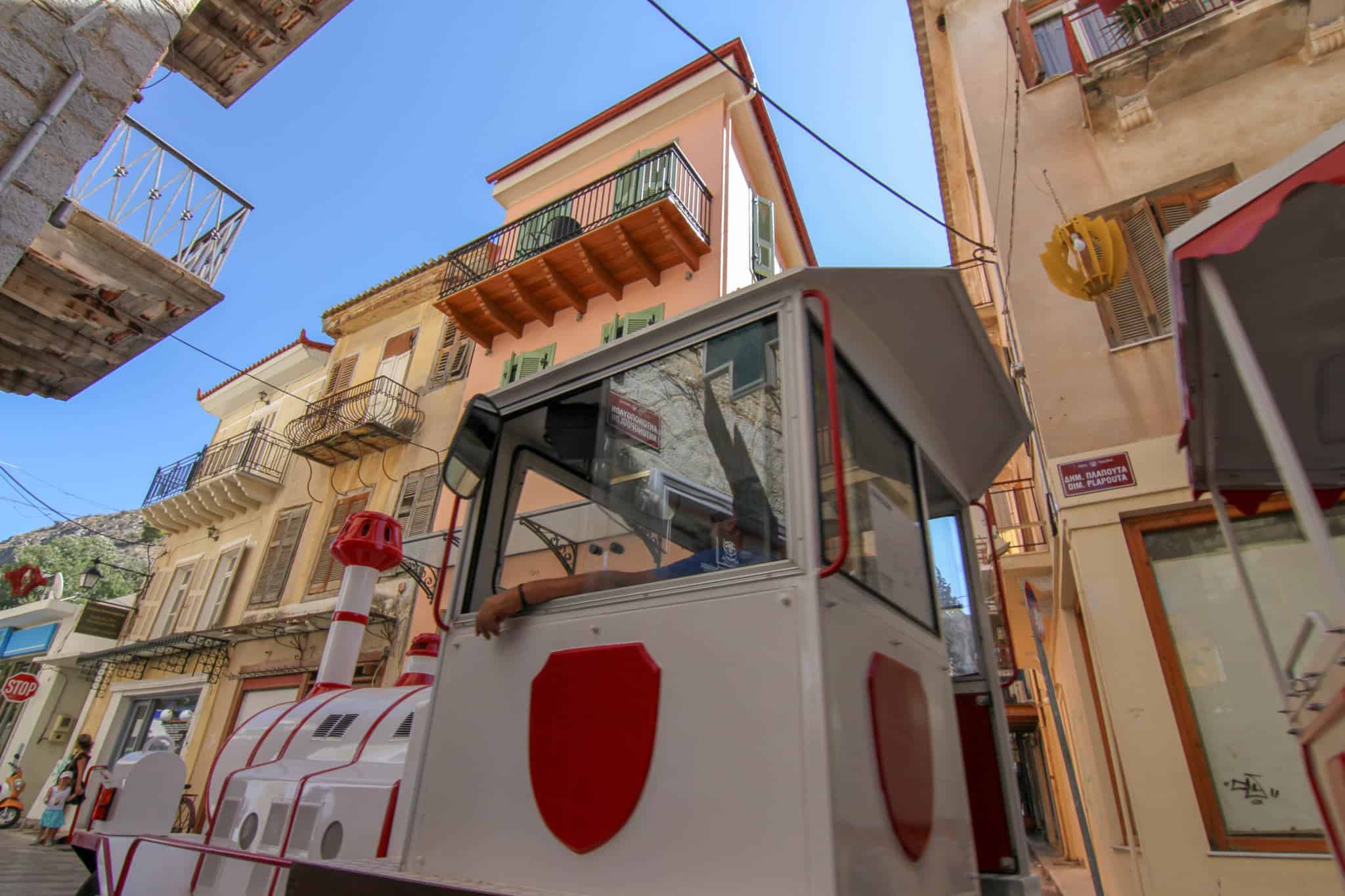 Bourtzi Fortress is another fortress you can find in Nafplio. This one’s located on a little islet right off the port. It’s so close you can actually see it while walking along the harbor! There are boat taxis that can take you over to the fortress to check it out. The castle was built in 1471 and now hosts the annual Summer Music Festival in June!

The boat trip to the castle only takes a few minutes and will cost you a few euros but entrance to the castle itself is free. The castle is undergoing repair work so it is periodically closed. I’d recommend checking with the boat drivers whether you’ll be able to visit the castle or not! 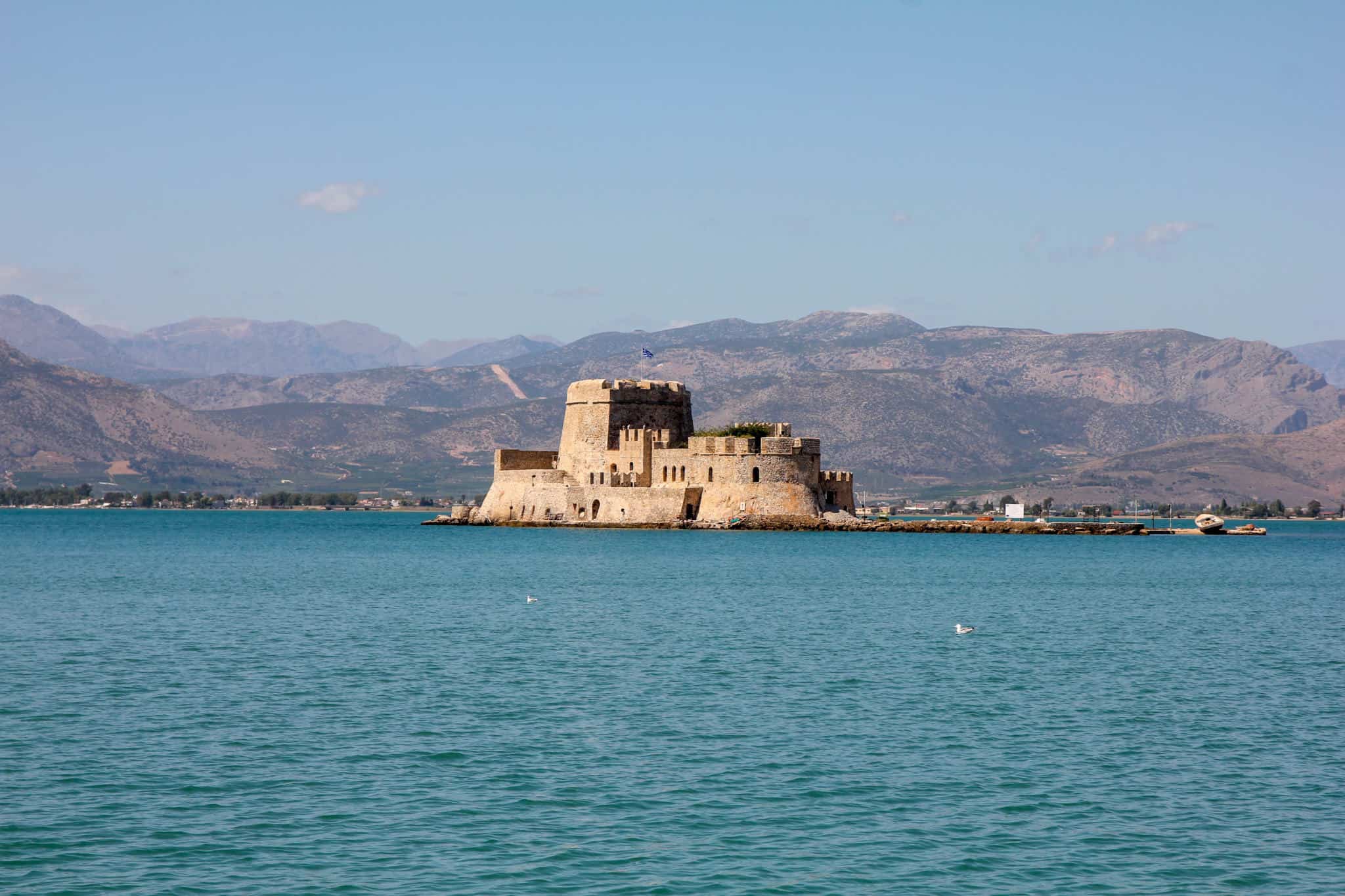 Spend some time on the beach(es)

Nafplio has a number of beaches including Karathona and Aravitia. The part of Greece where Nafplio can be found is a stunning coastline so if you’ve got a car you can certainly get in it and drive up/down the coast finding your favorite beach. We didn’t bring bathing suits with us but we spent plenty of time walking up and down the two beaches and dipping our feet in the water. It’s honestly super easy to spend all day just on the beaches and given how stunning they are I certainly wouldn’t blame you for doing so!

Walk along the Shore

Right along the water and close to the main road you’ll find a row of stunning palm trees. I’m sure if you live in Nafplio it’s a common sight but for us it was one of the first things we saw coming into the town and I loved it! It was so different from what we had seen in Athens/Santorini/Meteora and just made me so happy so you know I for sure spent my time walking up and down here and taking lots of pictures!

Spend some time at the Kolokotronis Park 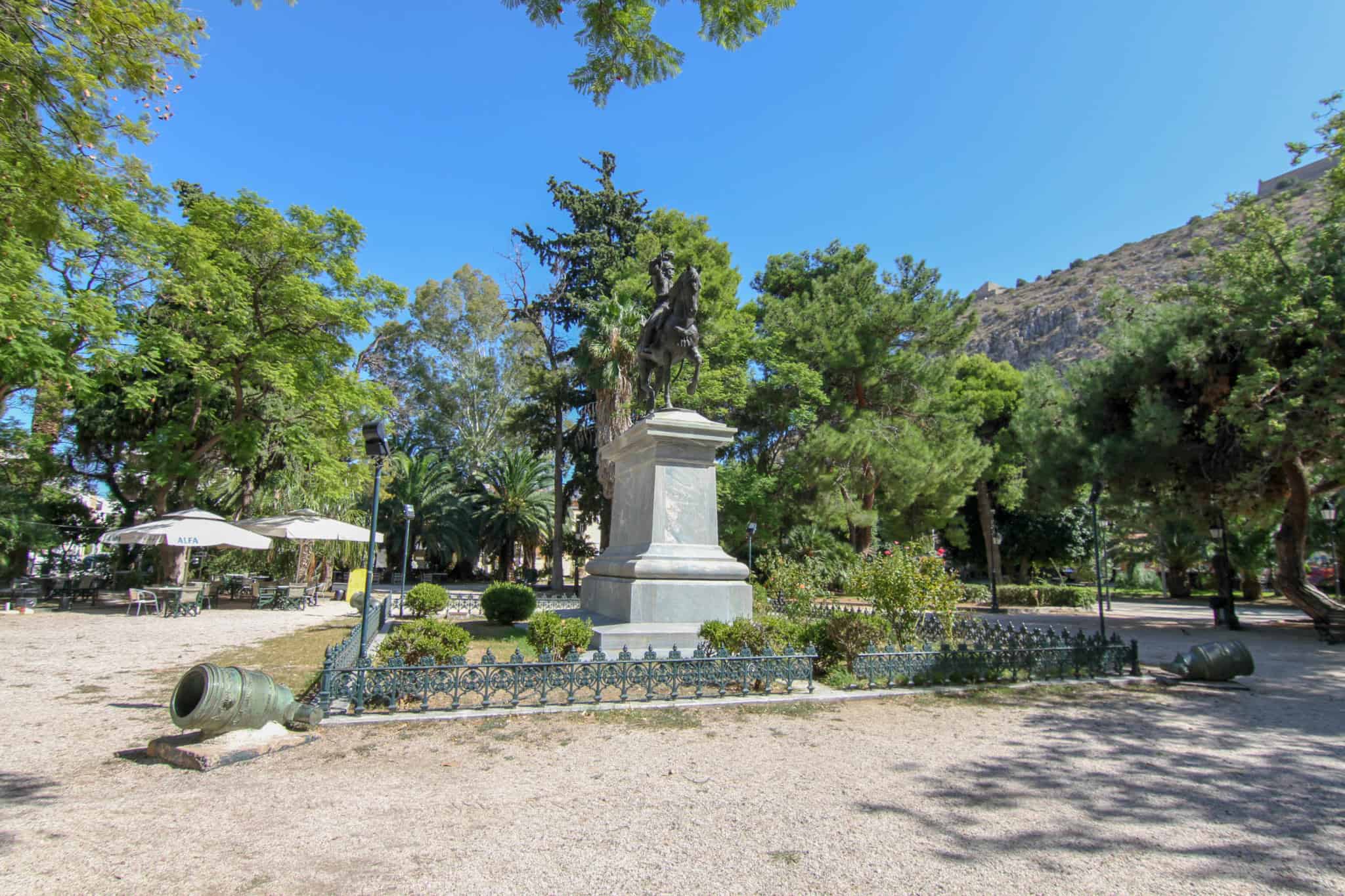 Akronafplio Fortress is the third fortress in Nafplio (and on this list!) and parts of it have been around since the Bronze Age! Back in the day, before all the invasions, the entire town of Nafplio actually existed within the walls of the castle which is kind of cool! The town obviously grew and expanded with people moving in and out of it.

Last I checked on the official website, entrance to the fortress is free! One of the highlights to check out while exploring it is the “Five Brothers” which is a set of 5 original cannons pointing out towards the water.

Check out some churches

I found Greece in general to be quite a religious place and we came across many churches on our trip. It’s no surprise then that a town like Nafplio has churches. And quite a few of them as well: 7 to be exact. They range in denomination but they’re all quite pretty. They’re different from the grand cathedrals you may associate with European capitals but they’re nice nonetheless! You’ll come across them while walking around town for sure so if you’re dressed for it (we were not given that I was wearing shorts) I’d recommend going in and checking them out.

Walk around the streets of Nafplio

Make sure to pop into the alleyways of Nafplio where you’ll find some fantastic restaurants and gorgeous little shops. We spent a lot of time walking around the streets. I was super charmed with all the architecture and flowers and beautiful homes and it was one of the things that made me absolutely fall in love with the town!

There’s no right or wrong way to spend time in Nafplio. Yes there are a lot of things to do in Nafplio but overall it’s also just a super charming little town so if all you choose to do is lie on the beach, walk around the streets and eat great food then you’ll still be in for a lovely time! Let me know in the comments if you’ve ever been and pin this post for your own upcoming visit!