Oxford served as the inspiration for the Great Hall in addition to actually serving as a filming location for many memorable scenes. Luckily, an Oxford Day trip from London is super easy and you can be in Oxford and experiencing all the Harry Potter locations in Oxford before you know it.

The Harry Potter locations in Oxford are spread across the Bodleian Library and two colleges: New College and Christ Church College.

The Duke Humfrey’s Library in Bodleian Library is what you’ll recognize as the restricted section of the library at Hogwarts.

The library looks exactly  like what you think the library at Hogwarts would look like. There are shelves of books from the floor to the ceiling. The book spines are in those ancient greens, reds and browns that you’d picture old books being coloured in. The coolest thing is that they’re actually set up so that an alarm goes off if you touch them which is quite reminiscent of the book that screams once Harry opens it in the restricted section.

Fun fact that we were told on the tour of the library is that no fire was allowed during the filming because the library completely forbids it. The fire you see in the big lamp that Harry is holding was added in with effects after the fact.

The Divinity School in Bodleian Library was used as the infirmary of Hogwarts and based on how incident prone all the characters were, this definitely featured in the movies quite a bit.

Examples of scenes featuring the Divinity School are:

Additionally, in Goblet of Fire, the Divinity School got transformed into the room where Professor McGonagall teaches the Gryffindors how to dance in preparation for the Yule Ball.

The reason they couldn’t film the Great Hall at Christ Church College was because they could only fit 3 of the house tables into the hall. What they did instead was replicate the hall by mapping it out entirely and then recreating it in the studio. If you visit both you’ll definitely see the resemblance.

The staircase features mainly in the first two movies. In Philosopher’s Stone, in addition to the above scene, they also feature the staircase at the end of the movie when the trio reunites after defeating Professor Quirrell. In Chamber of Secrets, Ron and Harry run up the staircase after their less than graceful landing on the ground. One of the scenes also shows Tom Riddle and Dumbledore speaking (from the perspective of Tom Riddle’s Diary).

The cloisters at Christ Church College were used to be the halls of Hogwarts. There’s a particular scene in Philosopher’s Stone where Hermione shows Harry a trophy in the the hallways that was his father’s Quidditch trophy. 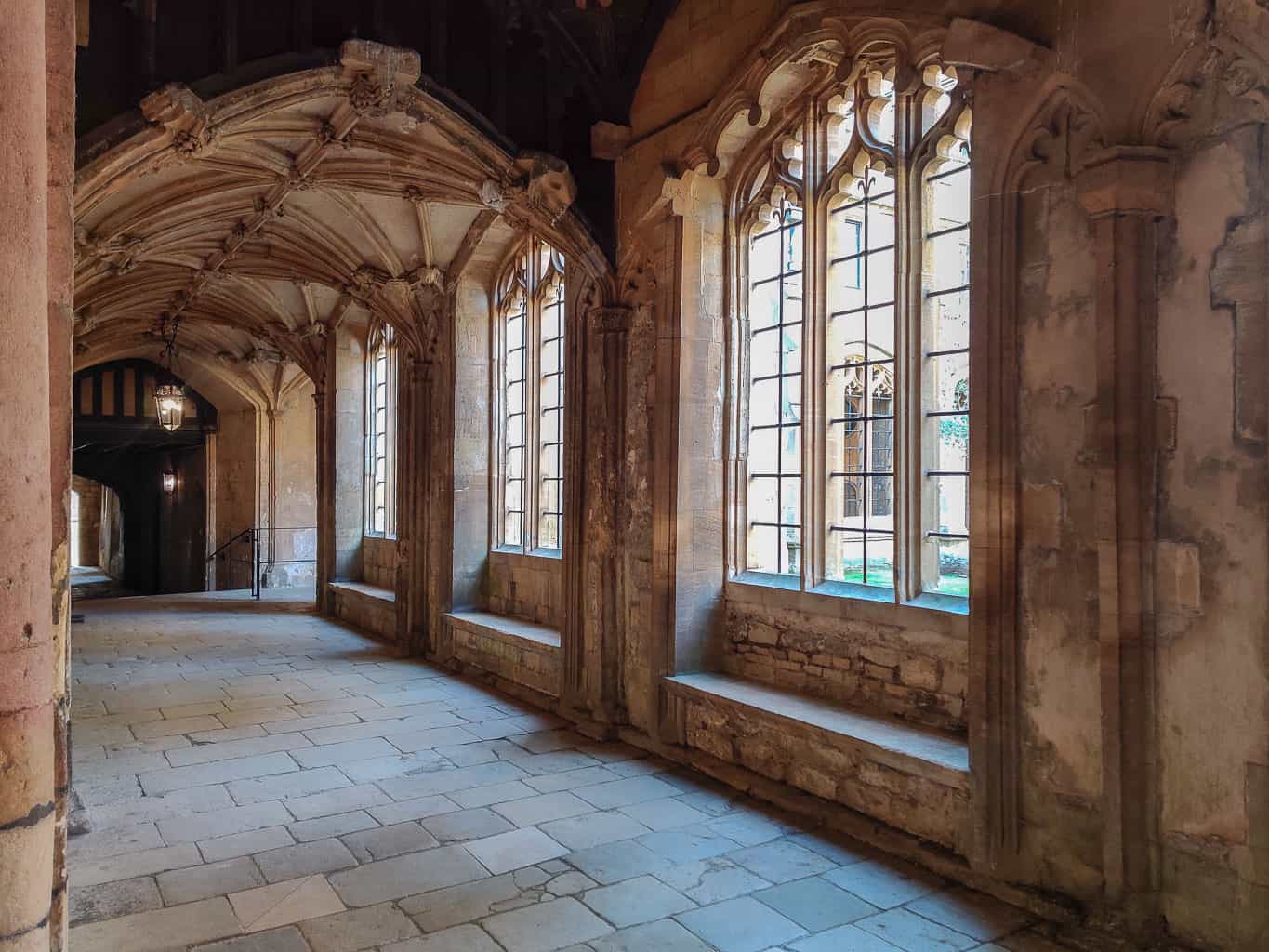 The New College Courtyard is featured in a particularly memorable scene from The Goblet of Fire. In the scene Draco Malfoy is seated in a large Oak tree which you can actually find in the Courtyard of the New College. Harry and Malfoy get into a verbal disagreement but very memorably, Professor Moody interferes and Malfoy gets turned into a ferret.

I unfortunately didn’t get to see New College as it was closed on the day I went but I did get to see the famous tree from the outside. It’s located right past the Bridge of Sighs (as pictured below). You can also transport yourself there with this google street view.

The cloisters at New College heavily feature in the Goblet of Fire. A lot of of the scenes in the hallways were actually featuring the cloisters and the scene where Harry warns Cedric that the first task is Dragons also takes place here. There’s a few other scenes like when Harry wanders around during the Yule Ball as well.

How to visit the Harry Potter in Oxford Locations

Something to keep in mind for your visit is that July and August is very busy because of tourist season and in general the weekends are much busier. I visited on a weekday in October and didn’t really face crowds anywhere I went in Oxford.

Bodleian Library is the only portion of this building that requires a tour.

If you don’t have to visit Duke Humfrey’s Library, you can pay 2.50 pounds to visit just the Divinity School. You can do this between 9 am and 5 pm Monday through Saturday and at 11 am and 5 pm on Sundays.

Christ Church College Visitor Center is open between Monday-Saturday between 9:30 am and 4:30 pm and on Sundays between 10:30 am and 4:30 pm and the hours of the portion of the college you can visit will vary. You can visit this college entirely on your own and guide yourself through it. The audio tour/guide is part of the ticket price. I would estimate it took about 1 hour total to walk through the college and follow the guide. You may want to add a little extra time for pictures

Tickets cost 15 pounds and you can purchase them online. Portions of the college may be closed (i.e. Cathedral or Hall) in which case you can get a discount on the ticket but you won’t be able to purchase the ticket in advance.

New College has different prices and hours for the winter and summer season.

Winter runs from mid October to early March and they’re open Tuesday-Saturday between 1:30 pm and 4:30 pm with the last admission at 4:15 pm. Tickets cost 5 pounds.

Summer runs from early March to early October and they’re open daily between 10:30 am and 5:00 pm with the last admission at 4:45 pm. Tickets cost 7 pounds.

Like the rest of the buildings at Oxford, New College has planned closures so make sure to look into it prior to planning your trip. It’s important to note that they may close access regardless so be prepared for that.

Tips for Visiting the Harry Potter Locations in Oxford

Many of the colleges close quite often (which is why I didn’t get to see New College!) and the Divinity School in particular has many days it’s not open. I’d look into some of the closures ahead of time to ensure you have the best chance of getting in to see the things you want to see.

Both the Bodleian Library locations can only be viewed on a tour which does sell out, so if you’re waiting until the day of to purchase your tickets then I would head to the ticket office as soon as you get to Oxford.

When visiting Christ Church College, the tickets aren’t timed. So the longer you wait, the potentially more crowded it becomes as people can take however long they want on the tour. I’d recommend heading here as soon as possible – particularly if you’re interested in semi-empty pictures.

There are plenty of tour options for experiencing Harry Potter in Oxford and if you’re short on time, Harry Potter is your only interest, and you prefer to have somebody talk you through the stops and give you lots of behind the scene information then a tour may be the best option for you. Personally I did not do a tour because I only had one day in Oxford and didn’t want to spend 2-3 hours of that on a tour. I prefered the order of my own day and even in hindsight I still wouldn’t have done a tour as they don’t guarantee that you can see everything on this list.

Do not that many tours don’t include the admissions to the colleges so you may have additional fees besides just the tour fee.

Which of the locations do you want to see the most? Have you explored Harry Potter in Oxford? Let me know in the comments and pin this post for your own upcoming trip to England!