Toronto’s got long winters. Like, really long winters. So when spring finally starts to peek out everyone is excited. Even the grumpiest of people crack a smile. Depending on how harsh the winter has been spring usually shows its face in early to late April. One of the clearest signs that spring has sprung in Toronto is when the cherry blossoms in Toronto start blooming. Now I know plenty of cities have fantastic cherry blossom collections but I’ve got a special fondness for the Toronto Cherry Blossoms.

Toronto has collections of cherry blossoms spread all throughout the city. Having lived here for what I consider forever (okay 16ish years) I only discovered the cherry blossoms 6 years ago. Shameful, I know! But blame university and living outside of the downtown core. But once I did see these little suckers it was hard not to fall in love. They’re so pretty, photogenic and smell so good! It’s such a perfect way to celebrate spring and the good weather to come.

History of Sakura in Toronto

In 1959, the Japanese ambassador of Canada gifted 2000 Sakura Trees to Toronto as a thank you for accepting Japanese-Canadians after World War II. Majority of these trees were planted along the pond in High Park. The Consulate General of Japan in Toronto has since planted an additional 3000 trees between 2000 and 2012.

It should go without saying that you should look and not touch when it comes to the Cherry Blossoms/Sakura Trees in Toronto. The more you disturb the flowers and the trees the more you damage them and may ruin future bloomings.

Don’t hang on branches or pluck the flowers – practice leaving no trace!

When do the Toronto Cherry Blossoms Bloom?

The Toronto Cherry Blossoms typically bloom in late April and early May but this can be really weather dependent and some years they bloom way more than others. While they typically stay blooming for about 10 days, rainy weather can significantly shorten the bloom time.

Where to find Cherry Blossoms in Toronto

You can find cherry blossoms all across the city (like you can see on the map below). I’ve listed the 17 places where you can find clusters around the city. There may be private locations like residences etc. but these are the official spots!

Located in the East End you’ll find Birkdale Ravine where 45 cherry blossom trees create a tunnel of awesomeness! You can find the trees specifically at the Pomeroy and Lyon Heights Road entrance.

The trees were donated by Sagamihara which is Toronto’s sister city in Japan.

Broadacres Park, located in Etobicoke, has a collection of 100 trees! The flowers can be found in the southeast corner of the park close to Elderfield Crescent. The 100 trees were planted in 2002.

Cedarvale Park has cherry blossoms as well but there’s no confirmed information on how many trees they have.

Centennial Park has the second largest collection of trees in Toronto with a collection of 463 trees. They’re a little bit more spread out in the park and you can find them just northeast of the conservatory and all the way to Rathburn Road. Bunch of trees were planted in 2002, 2005, 2009, 2010 and 2011.

The ground of Exhibition Place has 68 cherry blossom trees that were donated in 2002.

High Park is definitely what most people think of when they think of cherry blossoms in Toronto. It’s lovely but it’s also a hit or miss. High Park’s got a huge collection of blossoms (the biggest in Toronto) and it’s also the most well known collection. There’s an online blossom watch run by the park which predicts the bloom. Most of the trees can be found in one area of the park, down by the ponds. High Park gets busier and busier every year and as a result the city has had to figure out ways to deal with the crowds. While in the past you could drive to High Park during the blossoms you’ll no longer be allowed to do that starting this year.

As you can see from the High Park pictures there’s definitely a big difference in when you go and how busy it is. The first set of pictures (above) were taken two years ago in the late afternoon. Bloom in that year was in the first week of May and the flowers were really pink. We went to see the trees in the evening. While the sunset basked the trees in a perfect glow it was also incredibly busy. The second set of pictures (below) were taken last year in early May. We dragged ourselves out of bed and went to see the blossoms just after sunrise (and before work). The park was definitely a lot emptier. But maybe there was a difference in the light? The blossoms were definitely whiter and didn’t seem as full. I chalk that up to them blooming slightly earlier.

The Japanese Canadian Cultural Centre in North York has cherry trees on the north, south and east sides of the parking and some on the north side of the building. The trees were planted in 2002, 2004 and 2012.

Mount Pleasant Cemetery is definitely one of the hidden gems with cherry blossoms. Sadly it’s one of the ones I haven’t gotten to check out yet. But if you’re headed over there the blossoms can be found by the fenced portion of the road. Budget some extra time to walk around! It’s one of the prettiest walks in Toronto (even if it’s a bit creepy).

Robarts Library is also known as the peacock because of its shape. This University of Toronto icon however also houses a collection of 70 cherry trees that line the walking path at Huron and Harbord Street. This one’s particularly nice because they line a pathway which makes them really nice for photo shoots. 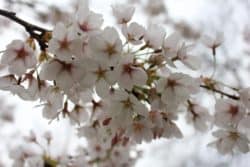 Most people don’t know that there’s about 30 cherry blossom trees on Center Island that were planted in 2011.

They’re also easily accessible as they’re only a 10 minute walk from the docks and can be found beside the William Meany Maze.

Since you have to take the ferry over, odds are that these are nowhere near as crowded as some of the other spots. So if you’re into having the place slightly calmer I’d check the trees on Center Island out!

Trinity Bellwoods Park is a Toronto staple. It’s a large and popular park in the downtown core. Many people spend lazy summer days here. Like Robart’s Library, majority of the 70 cherry blossom trees here line a pathway in the southeast corner of the park. It’s also super popular for all those OOTD posts. Saw 5-6 of them being done while we were there. The cherry blossoms in Trinity Bellwood do have one edge over the other locations, you can frame the CN Tower in a shot!

My alma mater, the University of Toronto Scarborough, actually has a beautiful collection of 50 trees by their humanities wing as well! It’s further east than most people venture but definitely worth it!

Woodbine Park has 20 trees planted along the curved path of the pond but they’re not mature yet.

The below map will show you all of the above mentioned locations:

Does your city have cherry blossoms? Have you ever seen the ones in Toronto? Let me know in the comments and pin this post for your upcoming trip to Toronto!