There are many things associated with London and British culture in general. Football, pints, royalty, culture, double decker buses and of course, afternoon tea. I’ve been to London 6 times now and I never stop finding new and cool things to do. My list of things I want to see and do in London grows every time I’m there so I don’t think it’s ever going to be a city I feel like I’ve had enough of (although, is any city like that?). I digress. One of the things I’ve wanted to do in London for a long time that I didn’t get to before this trip was an afternoon tea. I’ve had afternoon teas in Toronto before and wanted to try something a little bit different. I found out about the afternoon tea bus London tour on Instagram and was instantly hooked!

We didn’t have reservations ahead of time but made them while in London (about 2 days before the actual tour). I was so happy with the tour I couldn’t help but share but I want to point out that this was definitely not a sponsored post. I paid for the tour myself, I just really, really enjoyed it is all.

The Basic Details of the Afternoon Tea Bus Tour

Price: Your price will depend on your seat with the top deck being more expensive (but the view is completely worth it). Prices start at 45 pounds per person and go higher depending on your selections. There are 6 tables upstairs and 4 tables downstairs. The price will range based on the location of the table that you choose. I think our tickets rang in at about 55 pounds and we sat on the top deck. There is a 3.20 pounds booking fee when making your booking online as well. You can book your tickets here.
Duration: Approximately 1.5 hours (depending on traffic of course which can be notoriously bad)
Pick-Up: There’s two alternatives for pickup. The 12:30 pm and 3 pm tours depart just off Trafalgar Square (specifically at 8 Northumberland Avenue, WC2N 5BY). The 12 pm, 2:30 pm and 5 pm tours depart from Victoria Coach Station.
Dietary Restrictions: The tour can accommodate vegetarian, pescatarian and halal diets. Vegan diets and gluten free diets can also be accommodated at an additional 3 pounds per person. They do not cater to nut allergies and are unable to accommodate the combination of dairy and gluten free nor the combination of vegan and gluten free. They’re also unable to guarantee 100% gluten free. Make sure you read the instructions regarding allergies during the check out process!

The tour is organized and run by B Bakery. They’ve got a physical location in Convent Garden if you want to pick up some pastries after your tour as well.

If you’re interested in renting out the entire bus (or either the top or bottom half of the bus) that’s an option as well. Reach out to the team directly to organize this.

Important to note: There is no washroom on the bus so make sure you go before boarding the bus!

Also important to note: Unfortunately this afternoon tea bus London tour is not accessible and those using a wheelchair would not be able to participate. 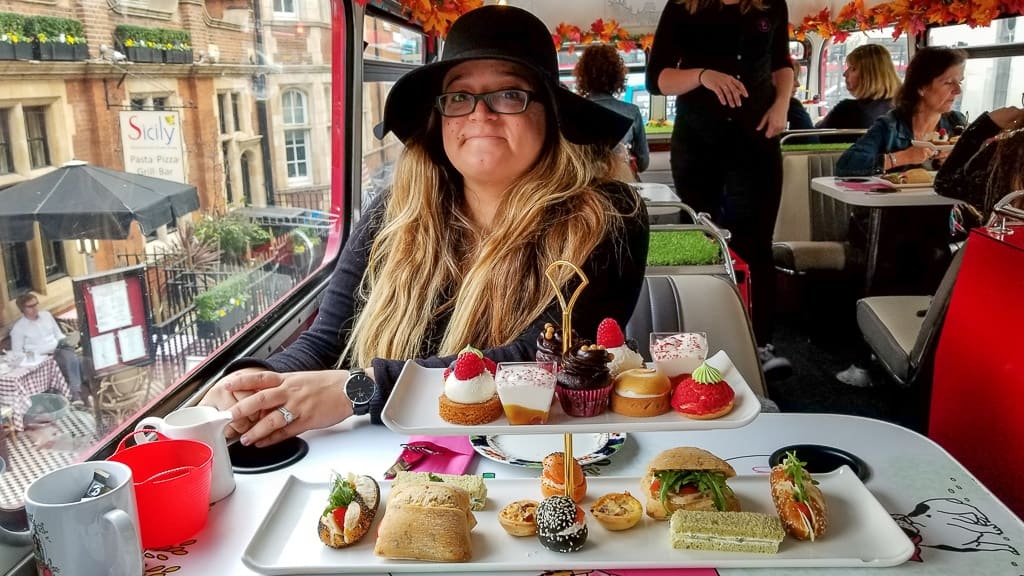 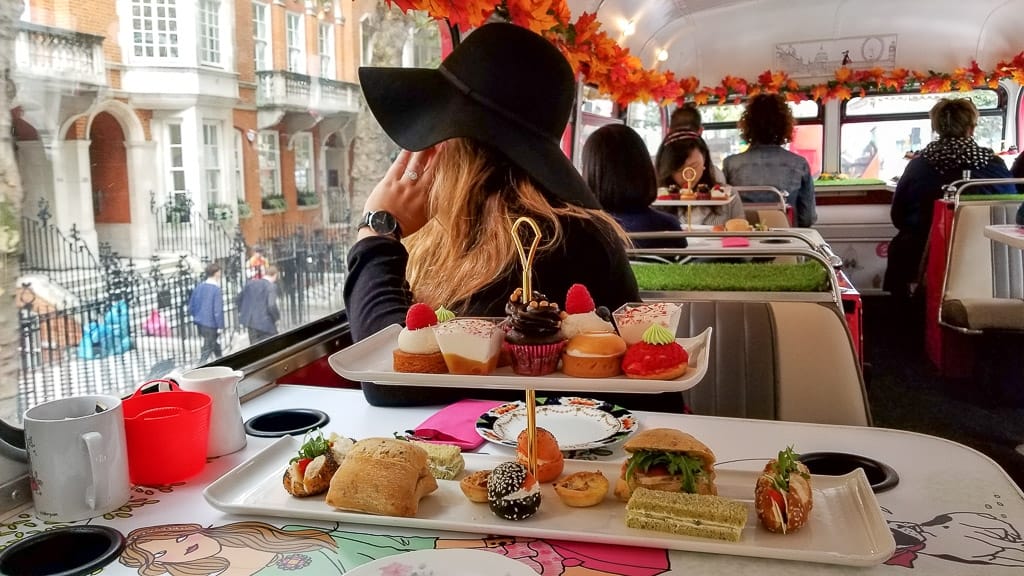 The Food and Drinks 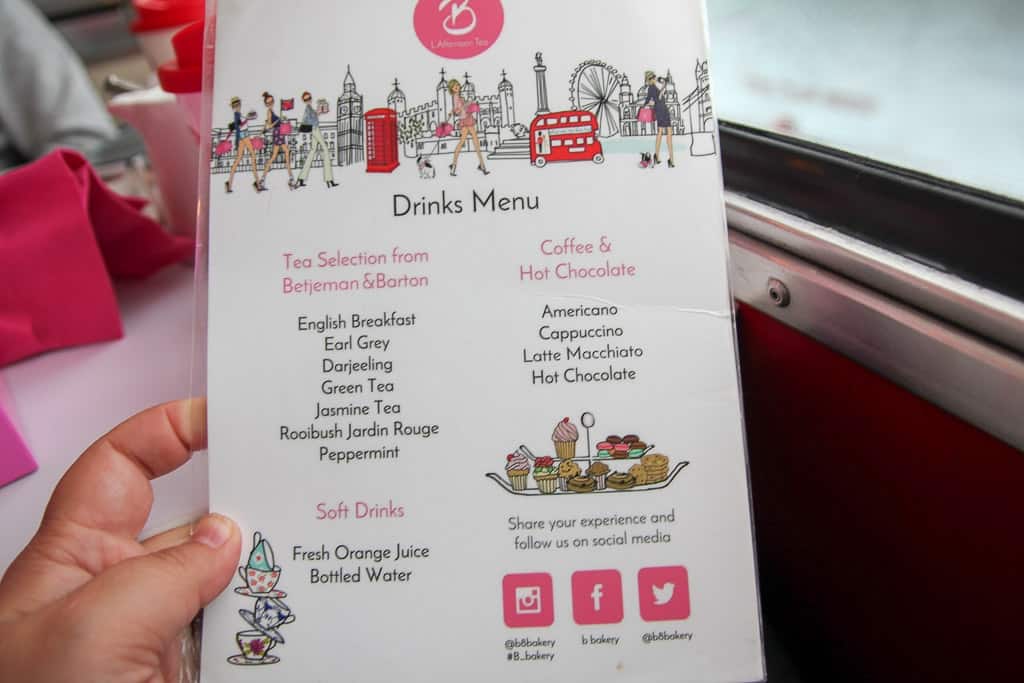 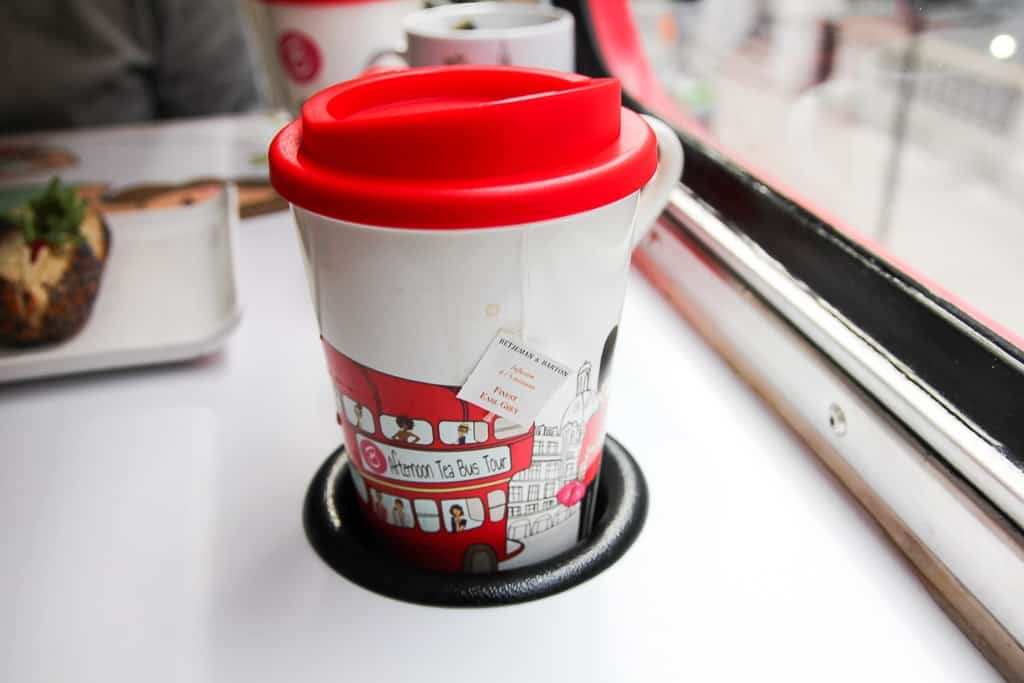 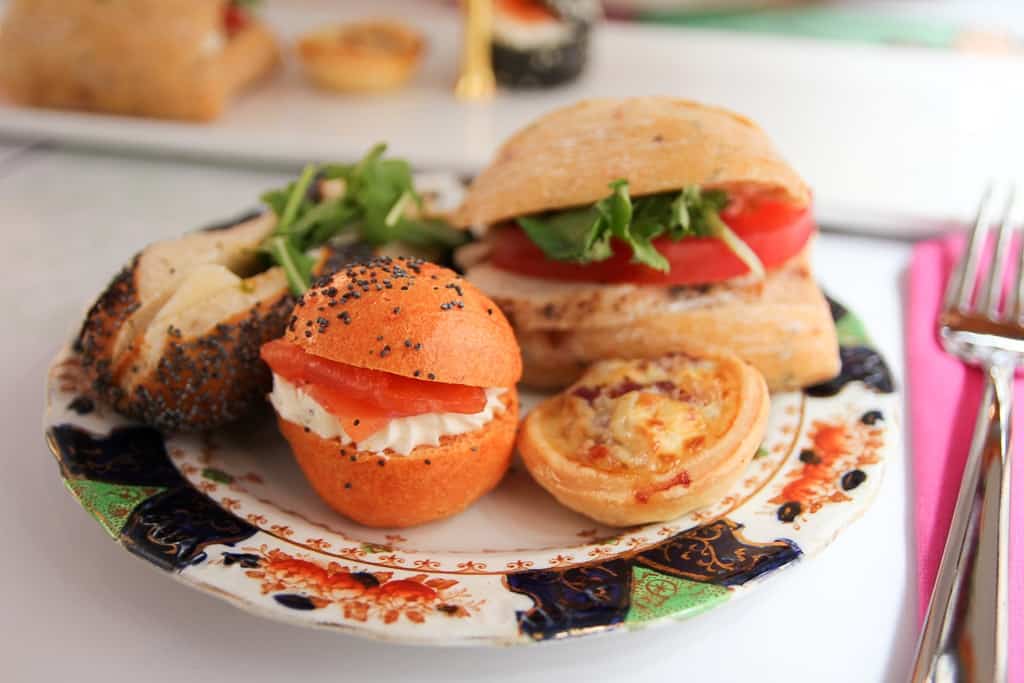 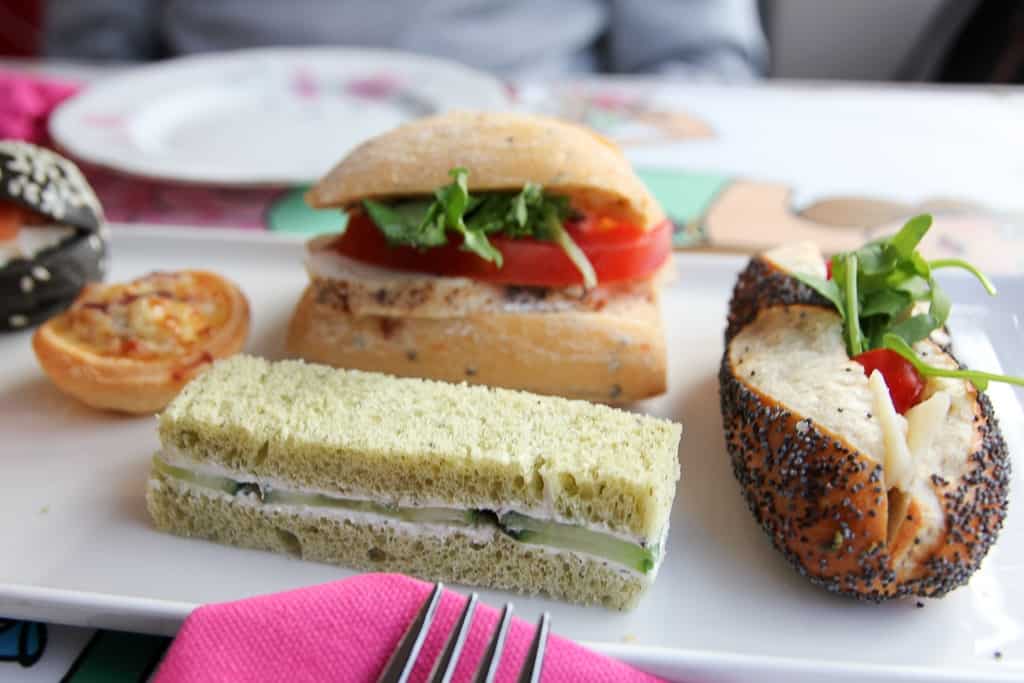 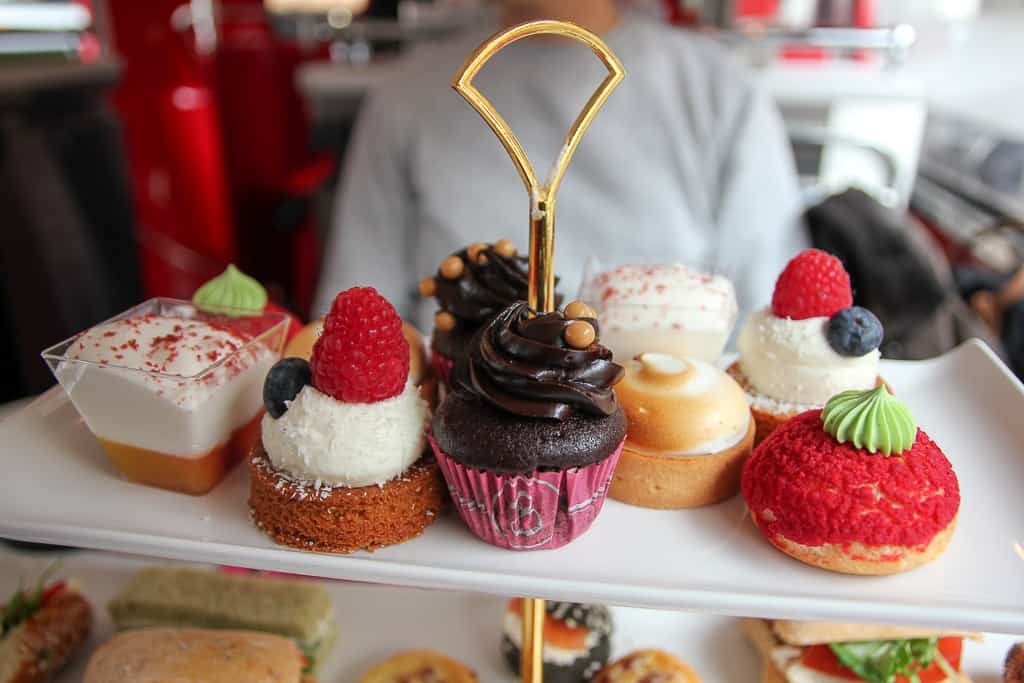 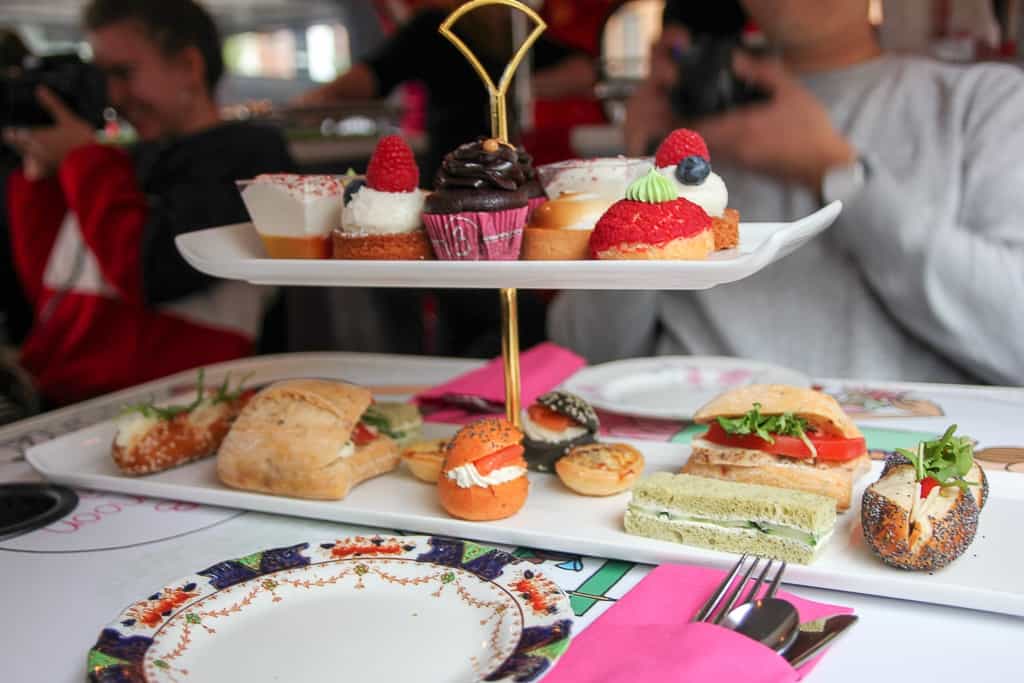 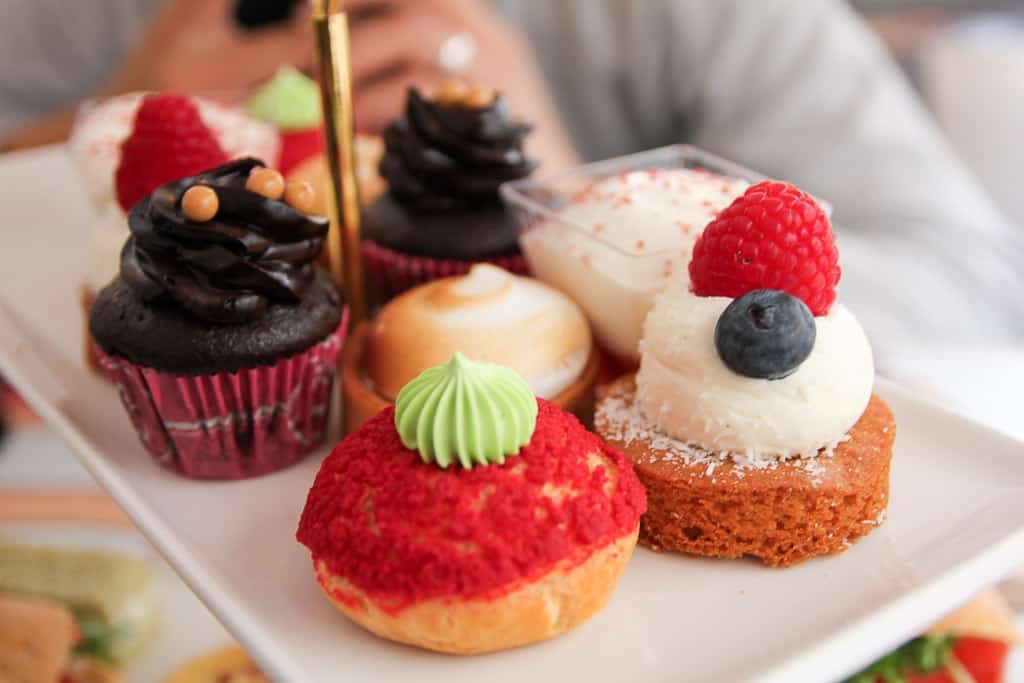 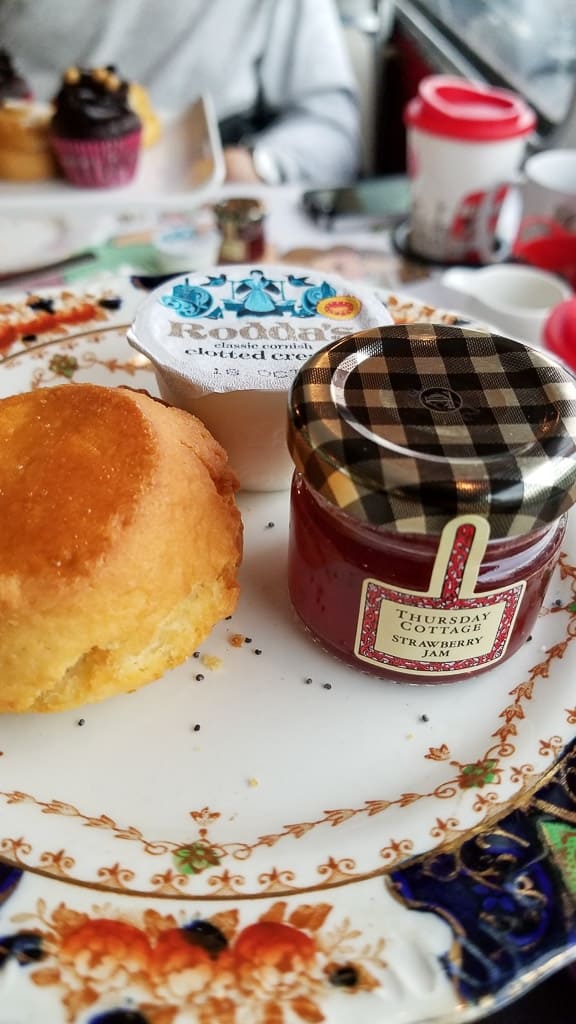 I was majorly impressed with the food offered. And holy. The sheer quantity of food. I’ve had afternoon teas before yet I magically forget just how incredibly filling the food can be. If you can’t finish it they’ll help you pack it up at the end of the trip which is great!

There’s a number of different tea options in addition to coffee and hot chocolate available (see the full list at the top of this section) You can also have fresh orange juice and bottled orange juice. They’ll come around and refill quite often so you can try a couple of different things. Remember there’s no bathroom though!

The food is served on a beautiful two-tier dish with the savory food at the bottom and the sweet food at the top. Every person gets one of each item to try.

My only disappointment was that the meal didn’t include scones as that’s one of my favourite parts of afternoon tea but lo and behold, about halfway through the tour scones were served! They came with super cute little jam jars that you could keep. Such a nice touch!

If you’re worried about your tea spilling you don’t need to be, there are convenient cup holders that hold your cup and all the cups come with lids!

As mentioned above, pick up can be done from two different locations: Victoria Coach Station or just off Trafalgar Square.

If you’ve never been in London before this is actually a great sightseeing tour as well since it goes past a lot of the incredibly major sites. I’ve definitely been to London before but my husband has not. We only had like 3.5 days in London so there was no way I was going to be able to show him everything I wanted to and this tour actually hit some sights I wasn’t able to squeeze onto our itinerary.

Major sites include the London Eye, Big Ben, Houses of Parliament, Westminister Abbey, St. James’s Park, Hyde Park, the Royal Albert All, Marble Arch, Nelson’s Column, Downing Street and so much more. There’s a speaker system on the bus and the hosts give small tidbits about the stops the bus makes which is pretty cool. Because of London traffic you can usually grab some pictures too because you do end up sitting in traffic sometimes! 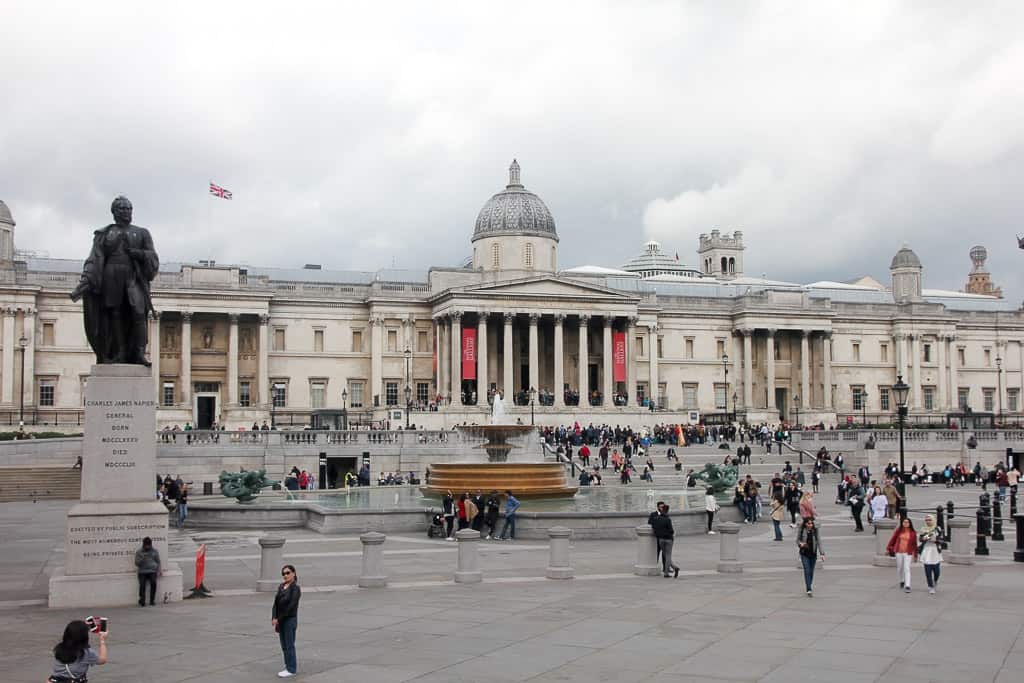 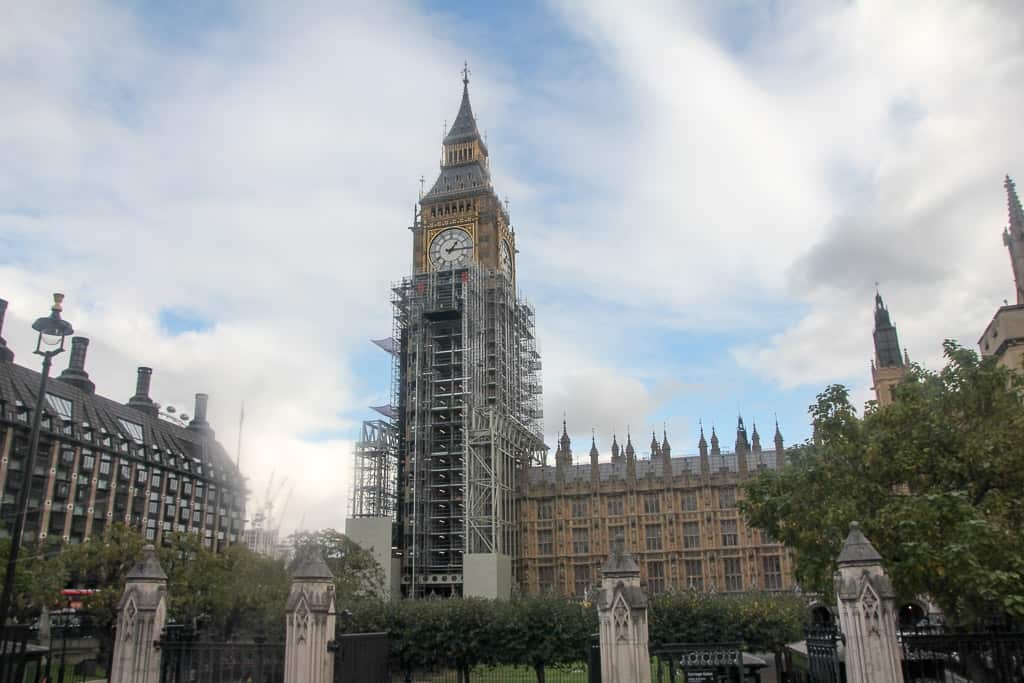 Have you tried out this unique afternoon tea in London? Would you if you haven’t? Let me know in the comments and pin this post for an upcoming trip!