Cobh is a quintessential Irish harbour town and a great stop on an Irish road trip. It’s sometimes overshadowed by its more famous neighbour Cork which is a shame because there’s plenty of things to do in Cobh and it definitely deserves a stop on any Ireland itinerary.

Located about 3-3.5 hours south of Dublin, Cobh belongs to County Cork. It was the dock for many ships (including the famous Titanic) leaving towards Australia, Canada and the United States in the 1800s (including the Titanic) and for some Irish citizens it was their last stop before leaving home forever. Given this history it’s easy to see why the harbour plays such an important role in Cobh even today and why a lot of the things to do in Cobh are centered around the harbour.

How to get to Cobh

How long to stay in Cobh? 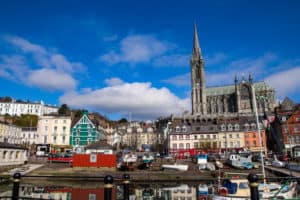 We got into Cobh the night before and then spent majority of the next day exploring the town before heading to Cork in the late afternoon.

I was quite satisfied with how much time we had in the town but if you want to visit Spike Island I’d definitely recommend minimum 1 full day or you’ll spend the entire day just running back and forth.

There’s more than enough to do in the town to easily fill 2 days and if you have a long enough itinerary to allow for that then I would definitely recommend doing that!

Things to do in Cobh, Ireland

Get that iconic ‘Deck of Cards’ shot

If you’ve ever seen a picture of Cobh then odds are that the picture you have seen is the one below. It’s quite the iconic shot and to be completely honest it was one of the main reasons Cobh got added to my list. I was super curious about where it was and how to get the shot and the addition of the cathedral in the back was just the cherry on top.

The ‘Deck of Cards’ shot can be found along a street that’s located on the steepest hill in Ireland. The street you’re looking for is called West View. About halfway up (or down depending on where you’re coming from) the hill there’s a small little park which is the best place to get the shot of the houses with the cathedral in the back.

We went first thing in the morning because we thought it would be busy but it was completely empty! We did have to deal with some shadows but soon the sun was so strong that it was hard to photograph anyways. I’d imagine sundown is probably a pretty great time to take pictures in the area. 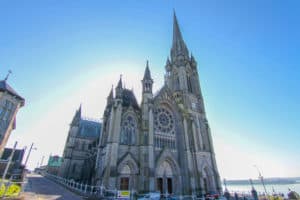 If you’re visiting Cobh you truly won’t be able to miss St. Colman’s Cathedral. It’s located right behind the iconic row of coloured homes (as discussed above) and close to the harbour which is the center of the town with a large majority of the things to do in Cobh being found around the harbour.

The cathedral is built in the neo-Gothic style with a giant carillon (a musical instrument with bells, specifically 49 bells in St. Colman’s Cathedral) in its tower. The building of the church was started in 1868, completed in 1915 and was designed by the architects Edward Welby Pugin and George Ashlin. 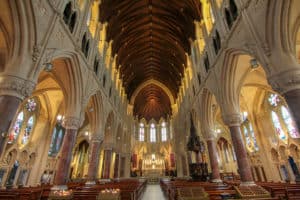 visit with the hour mark. The group of bells is actually the largest in all of Ireland and Great Britain so it’s work popping by to hear it for the reason alone.

The cathedral is open every day and is free to visit.
You’ll find free parking at the back of the church. It is a functioning church so do respect their rules and make sure you dress appropriately and visit silently.
The exact address of the cathedral is 5 Cathedral Terrace, Cobh, Co. Cork, Ireland but like I said, you won’t be able to miss it. You can find hours of masses etc. on the official website. 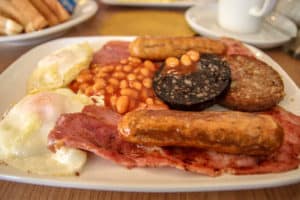 I’d recommend heading for breakfast after getting your fill of the cathedral and the photo spots. The main street along the harbour has a number of cafes but we tried Leonardo Cafe Kimbo and really enjoyed it so it’s why it’s my recommendation in this post. They can be specifically found at 5 West Beach, Kilgarvan, Cobh, Co. Cork, P24 X972, Ireland. They’re open between 8:30am and 5pm every day. 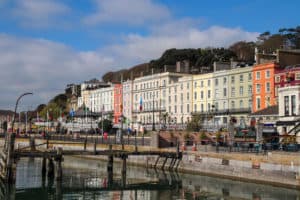 Walking around the harbour of Cobh is truly a must do.

You’ll get to walk in the same steps that people who boarded the Titanic did. You get to experience the actual last departure point of the famed ship.

Obviously the Titanic isn’t the only selling point of the Cobh Harbour.

There are lots of places to eat, it offers great views of both the town and the water and is overall a nice place just to stroll around and experience the town.

Spike Island is often referred to as ‘Ireland’s Alcatraz‘ and that may tell you exactly what type of island that it is. It’s been many things (monastery, military fortress) but from 1847 Spike Island became a prison for men and boys (as young as 12 years old). The prison closed in 1883 but re-opened in 1985 and was an operating prison until it closed in 2004.

You have to take a ferry over (which takes about 10-20 minutes each way) to the island where you’ll join a guided tour of the island exterior of the fortress. You’ll then be able to explore the inside of the fortress/prison. Audio guides are available in French, German and English.

The combined fort + ferry tickets for adults are 20 euros while for children they are 11 euros.

Spike Island was something we actually didn’t have enough time to do but once I really regret missing out and will prioritize next time I’m in Ireland! 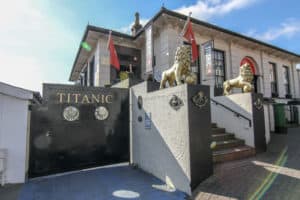 The Titanic Experience is exactly what it sounds like. You get to live out what the experience of being on the Titanic was.

Before the start of the tour, upon check-in, you’ll receive your boarding card. This boarding card will have the name and details of 1 of the 123 passengers who boarded the Titanic in Queenstown, Ireland (this is what Cob was formerly named and it is referred to as that throughout the tour). The tour guide will then take you through the doors and to the start of the tour. You’ll actually see the original pier, Heartbreak Pier, which is where the Titanic passengers boarded the boat. Once back inside you’ll get to see what living conditions were like on the boat and learn about how meals and bath times worked for both first and third class passengers. You’ll of course also get to experience the sinking through a visual experience. Once the sinking is complete you get to the last part of the tour which is in an open area where you’re free to explore and discover on your own. This is also where you’ll find out whether your passenger survived or not. 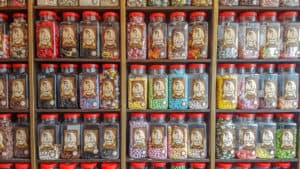 Aunty Nellie’s Sweet Shop is a chain of candy stores and Cobh happens to have a super cute location.

It can be found at Casement Square, Kilgarvan, Cobh, Co. Cork, P24 Y560, Ireland along the main street of the town.

It’s a great place to pop in and grab a little snack or even some old fashioned candy as a souvenir for somebody back home!

A fun way to explore Cobh is to ride the 50 minute long Cobh Road Train. It departs from the harbour (where passengers boarded the Titanic) and travels through the town. Stops include St. Colman’s Cathedral and the Black Railings Scenic Point. You’re allowed to get off the train at the stops to take in the views and snap some pictures.

The train operates seasonally and runs up to 8 rides a day. Adult tickets cost 8 euros while child tickets cost 5 euros. 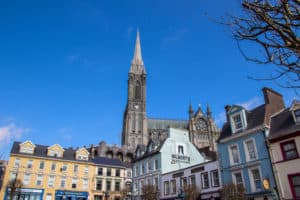 The Cobh Heritage Centre provides a self-guided tour that involves the experiences of emigration to North America, the Titanic and Lusitania sinkings, transporting convicts to Australia and so much more.
The Heritage Centre is open 7 days a week between May and October and the hours are 9 am to 6 pm. Between November and April it’s open Monday-Saturday between 9:30am and 5pm and on Sundays and Bank Holidays between 11am and 5pm. The Centre is closed between December 23rd-26th and December 31st to January 6th. Last admission is 1 hour before closing
Tickets cost 11 euros for adults and 6 euros for children. The visit takes approximately 1 hour.

Annie More (actually name Anna) was an Irish immigrant who departed from County Cork and was the first immigrant to pass through Ellis Island. In honour of Annie Moore, and those in pursuit of the American dream, 2 monuments have been erected. The first one stands at the Cobh Heritage Center, the place of her departure, and the second at Ellis Island, where she landed. 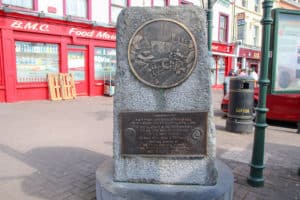 If you’re super interested in the history of the Titanic then the Titanic Trail Walking Tour is a must do. The 1-hour tour costs 12.95 euros for adults and 6.50 for children. You’ll get to see “original buildings, streets and piers associated with Titanic” in addition to learning so much more about the town. 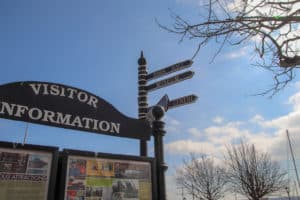 The Cobh Museum can be found be found in the Scots Church, which is a former Presbyterian church, and tells the story of the history of the town. The museum has a small genealogical reference section where you can do your own family research as well.

The museum is open Monday-Saturday between 11am and 1pm and between 2pm and 5pm. On Sundays it’s open between 2:30pm and 5pm. Tickets cost 4 euros for adults and 2 euros for children. 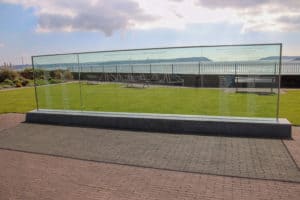 Located in Cove Fort you’ll find the Titanic Memorial Garden which is free to visit.

The park overlooks the harbour where the Titanic had its last 123 passengers board the ship on April 11, 1912. These 123 passengers, of which 79 lost their lives, are memorialized on a glass memorial wall which is the center point of the garden. It has all the names inscribed on it. If you’re coming to the park after having done the Titanic Experience then it’s kind of somber to find the person you were selected to play.

The garden has other information plaques on ships that have sailed from the harbour and also has a memorial stone to Bruce Ismay who was the chairman of White Star Line in 1912 and survived the Titanic sinking.

The Memorial Garden is walking distance from the town center (although a slight uphill to get there). There’s no designated parking lot but there’s a stretch of road right by the park that you can use for parking your car.

Opening hours are: weekends in February and October to Mid-November and  seven days a week March to September. When it’s open the hours are 10.00am to 5.00pm. The gardens close between October and March.

If you wish to tour the house adult tickets cost 10 euros and child tickets cost 3.50 euros. You can pre-book your tickets online.

We were running short on time so we opted to walk around the gardens which was free and absolutely stunning! We probably spent an entire hour exploring and taking pictures. The variety of plants and flowers was surprising and I was so glad we had enough time for the gardens on our itinerary.

Map of Things to do in Cobh

To more easily plan your upcoming visit I’ve put together a map of all of the locations for the things to do in Cobh:

There you have it! A complete guide to the things to do in Cobh, Ireland. Have you been to the town? What was your favorite part of the town? Let me know in the comments and pin this post for your own upcoming trip to Ireland.